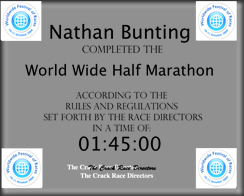 As you can see from the previous post I should be in the recovery phase from running a marathon on the 27th of last month. Should be. Instead I’ve been pushing myself since I completed my goal for 2009.I let myself have two days rest after the marathon before hitting the pavements of my home town again. I have been running a reduced amount of kilometers, but I will flesh out my reasoning here as to why I’ve added a different kind of post-training plan.

Firstly I’m still learning my limits by experimentation. I’ve run a marathon, but I’ve never run a half marathon. I had absolutely no idea of how I would perform. I am not able to just act-as-if a training run is a race. I have learnt that there is a big difference between how one’s body, mind and spirit perform under a race when compared to a standard long run under training. I can physically push myself harder, my internal dialogue is more focused and I can self-motivate more easily. It is not just  “bells and whistles” of an organised event. I need fellow runners.

The World Wide Festival of Races is an event inspired by the run.net community. This virtual group is based around the online activities of a group of runners who record their thoughts, theories, training reports and personal insights either in the form of blogs, audio or film podcasts. The nexus of the group seems to be the website http://www.runningpodcasts.com. A second web tool they actively use is an online training log http://www.buckeyeoutdoors.com. There is, what can only be described as, a core glitterati of runners who are the most active in developing the community and one offshoot is the World Wide Festival of Races.

The World Wide Festival of Races is a virtual event where runners choose from three tiered events and partner a real event or long run with the virtual, running it on the weekend of the 10th or 11th of October. The defining principle is that the geographically separated runners will be running an event together. 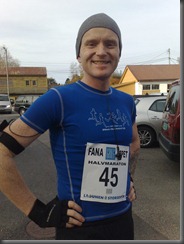 I decided to run the Fanaløpet. This race was wonderful. What defined it for me was exploring areas of my locality situated around lakes and forests that I had never run before. Instead of focusing on the here-and-now of the physical run I was occupied by the beauty of the nature around me. Luckily, as with the recent Oslo marathon the weather was uncharacteristically fine for the time of year which added to the overall experience. I was alone for this race for several short periods and the solitary meditative  moments gave me time to reflect on my fellow runners around the world. I would therefore say that the raison d'etre of the WWFoR functioned perfectly. I ran a satisfactory 1:45. This was very much a Zen run for me though. I ran without a pulse /GPS watch and had no idea of my performance for the run. Through another moment of synchronicity I had chosen to send my Garmin pulse watch back for repair the week before. I knew that I wouldn’t need it for this race.

I hope that my fellow runners had as much of a fun-run as I had under this event. Thank-you so much to all of the hard working guys and girls behind this wonderful experience. 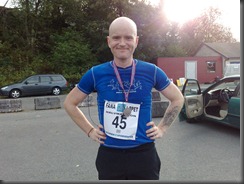